One day while preparing Fintan the Salmon of Wisdom for his mentor Finnegas to eat, he inadvertenly burned his finger. When he licked his finger to soothe the pain, he acquired all of the  knowledge from the juices of the fish. From that time on it was said that he knew all theings that were and had been and were yet to be. Finn was finally awarded the captaincy of the Finians fo Erin over Goll MacMorna after the slew the unholy monster Aillinne of the Flaming Breath which had terrorized the city of Tara for twenty years.

All of Finn's men were tried and trusted warriors... for it was no easy task to become a member of that proud brotherhood. Each of Finn's men had to prove themselves brave and skillful with every manner of weapon through a series of tests, in addition to memorizing the twelve books of ancient poetry and most of the old stories, as well. Once he had passed these tests, he was admitted and bound by four pledges:

Some of Finn's men became legends in their own right. Conan, son of the chief of Laucher, regarded as the keenest and hardest fighter, served Finn for thirty years.

The tales of Finn and his men are legend, for Finn lived in a time where history merges with myth and folklore. It was a twilight realm that was neither wholly real nor wholly imaginary. Where gods and goddesses mingled with the human men and women. It was said that Finn was a king and a seer and a poet and that everything that he said was sweet sounding to his people; that a better fighting man than Finn never struck his hand into a king's hand; that whatever anyone said of him, he was three times better. He was quiet in peace and angry in battle. Of his justice it used to be said that if his enemy and his son had come before him to be judged, it is a fair judgement he would have given between them. Of his generosity it was said that he never denbied a man as long as he had a mouth to eat with and legs to bring away what he gave him... and he never promised at night what he would not fulfill on the morrow. Indeed the spirit of Finn McCool is embodied in the motto of his men: "Strength in our hands, truth on our lips and cleanness in our hearts."

WHO WAS FINN McCOOL?

In Ireland, as well as in parts of Scotland today, people still speak of the hero Finn MacCumhail (pronounced Finn McCool) as though his adventures had taken place only a few generations ago. Finn was the son of Coole, Lord of the Clan Beeskna and Captain of the Finians of Erin, the warriors of King Cormac MacArt, High King of Ireland from 227-266 A.D.. Coole was slain by Goll NacMorna who took over the command of the Finians when Finn was a small boy.

Coole's young son was described as being very tall with hair as bright as barley glistening in the sun at harvest time. He was brought to the attention of a Celtic Chieftain as a result of his astonishing skill and swiftness when he single-handedly defeated an entire team of boys his age in a hurling game. It was this ruler who gave him the name Finn (meaning fair or white). Young Finn was so skilled a hunter that with a single throw of the spear, he could bring down a bird in flight, and so swiftly could he run that he could overtake deer without the aid of hounds. 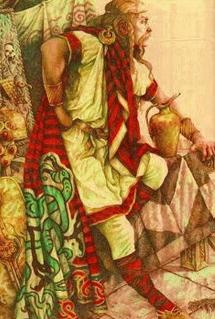 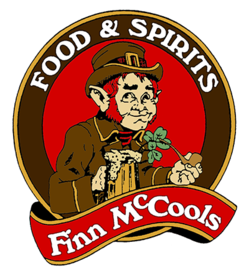